Schwinn is not a company you would associate with ellipticals or exercise equipment. Being founded in 1895, Schwinn has become world-renowned for their bicycles. While leading the bicycle market for years, it wasn’t until 1965 that they added exercise bikes. Nowadays they are also make treadmills and ellipticals.

Schwinn ellipticals are known for having a lower price than some of the others of its kind. Schwinn has two main models when it comes to their ellipticals; standing and seated. The standing elliptical is part of their active series, while the sitting elliptical is similar in shape to a recumbent bike.

Pros and Cons of Schwinn Ellipticals

Schwinn ellipticals are typically have a sturdy frame. Many ellipticals in the same price class made by other manufacturers will move or slide across the room due to being lightweight. Schwinn’s frames are sturdy and heavy enough to prevent movement and also holding up to 300 pounds. Most of the ellipticals in the Schwinn active series have a stride of 20 inches allowing for maximum stride. Resistance is controlled digitally, and depending on the machine, the elliptical can have up to 25 resistance levels. This is good for anyone of any level to use. Schwinn models also feature inclines, reaching up to 10% incline.

Schwinn ellipticals can store around 20 or so different workout programs which include a manual or user designed workout. The programs can be controlled depending on heart rate data in real time, however the seated elliptical only has three available preset workouts installed. The active series is also compatible with wireless heart monitoring chest straps. Thanks to the wheels of the elliptical, moving the machine is easy when you need to relocate it.

User reviews have stated that certain models of Schwinn like to squeak when you make a stride. Schwinn machines are also raised higher than other models which can disorientate those with balance issues. One way to prevent this is to look into a seated elliptical. The warranty is also not as good as other brands, with limited coverage that expires after 90 days. 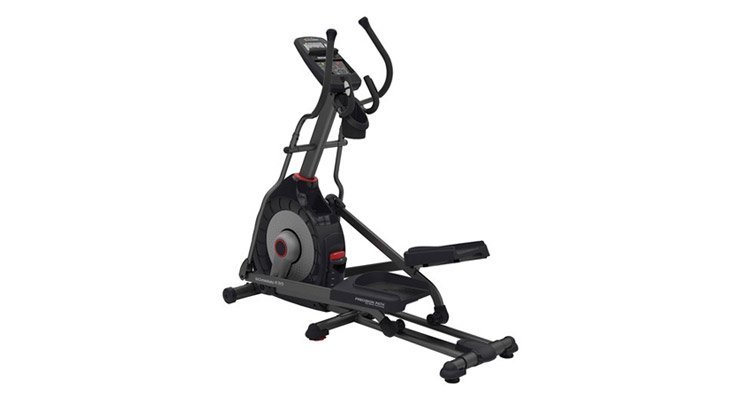 The 470 is one of the best reviewed elliptical trainers from Schwinn. It is a front-drive elliptical with a 13-pound flywheel. It is said to give users the best and ergonomically sound workout with different programs that allow you to monitor your heart rate. It’s console features two LCD screens which can give you 13 different types of monitored feedback. It also comes with 29 different workout programs with available user settings and goal tracking. You can also store data for up to four people.

It features a maximum stride length of 20 inches with a power incline range that can be adjusted with six positions. The 470 also has 25 levels of resistance with a high speed flywheel to keep your machine quiet during workout.

The Schwinn 430(i) features a lot of the same things that the 470 has, except for a few differences.  For example, it shares the same front-drive design and a 13-pound flywheel. It is a lower end model, so instead of having power incline, 430 features manual incline adjustments. It is also rated a little lower than other elliptical machines. The main complaints of the 430 is the weaker frame. During assembly, some users have noted that certain parts may break during construction. However, this may be due to user error as there are just as many reviews saying how well put together the machine is.

The 520 is a Recumbent model which means it is a sit down elliptical. Sit down ellipticals tend to be smaller in frame and take up less space. The 520 uses the ergonomic design of an exercise bike and Airdyne to simulate resistance. The seat is reclinable and ventilated wand encourages good exercise postures. The machine can be set up to read calories, distance time goals. It’s display is easy to read and is located in an easy to reach place. The machine is pretty light at 120 pounds and can support up to 300 pounds.

In the end Schwinn is a good brand if you are new or getting back into exercise. If you don’t want to break the bank or you just need a transitional piece of equipment. Bikes are not the only type of exercise they help promote, but unlike their bikes, the machines can vary in quality so you may want to do some research to see if Schwinn is right for you. Just remember that they aren’t built to last like other machines are. So you will want to take that into account when shopping.

While Schwinn is not truly known for their exercise equipment, their machines are good for beginners. They are priced lower than other elliptical machines, but they don’t last as long. While some cross trainers are built to last a lifetime, Schwinn’s are made to last maybe a couple years at best. The resistance provided by these machines aren’t as strong. So anyone who is looking for a serious exercise program would not benefit from a Schwinn. The warranty on some parts and machines are also not as good as other brands. Also check Bowflex and Life Fitness.

User reviews vary, but their machines are generally reviewed positively with only a few complaints levied at them. Parts may break easily and they can be a hassle to replace, especially if the warranty only covers so much. Of their models, the 470 is the best reviewed because it is the highest quality. It has everything that other models such as the 430 has, but just a bit more. The 430 is good as a starter vehicle or those who don’t want to spend as much for the 470. The 520 Recumbent Elliptical is for those who may not be comfortable on a standing elliptical. Its seating is made in an ergonomic fashion allowing for anyone to be able to get the maximum workout possible. While the Schwinn does have other models, they are not much different than the ones mentioned here.