You see them all the time in a gym. They look like a treadmill and a StairMaster had a baby, and when you get on them, it looks like you are running in midair. This is an elliptical. An elliptical is a useful machine that allows you to simulate climbing stairs, walking or running without causing too much pressure on your joints and muscles which lowers the impact and risk of injury. Ellipticals can use a non-impact cardiovascular exercise that can change from low to high intensity depending on the speed and resistance that the user wants.

Some of the main benefits of elliptical trainers include more exertion of the heart and leg muscles compared to a normal treadmill as well as giving you a larger range of motion for your legs. This is more than you would get with a standing bike or treadmill. Studies have shown that because you can make longer strides using an elliptical, that the lengthened stride allows for higher calorie burn.

ProForm Fitness is one of the well-known brands that have a wide range of ellipticals available. In this article we will look at the pros and cons of ProForm ellipticals. We will also guide you through the various models they have for sale today.

Some highlights of ProForm elliptical machines include touch screen consoles with online web browser capability. Their speakers also allow for iPod capabilities. You are able to customize the performance of your workout with length of stride, the incline and how much resistance you want. The incline can be adjusted using manual or power systems. The handlebars can be adjusted for a full body workout. Works with iFit Coach, which provides training support and interactive workout routines.

To access the best iFit Coach content, you need to pay an extra fee. User reviews have stated that some equipment arrives with some damage, and getting replacement parts may take a little while. The price is less comparable than some low end models. Also check other brands like Schwinn Ellipticals or Precor Ellipticals.

The Endurance ProForm series uses their resistance systems on the front of the machine instead of the back. This is so they use up less space, unlike their rear-drive counterparts. The collection of the Endurance Series includes the Endurance 520 E, the Endurance 720 E and the Endurance 920 E. While the quality of drives, incline systems and stride adjustment improve with each model, the main systems remain the similar. They each feature a console, with the 920 E using the iFit Coach and web browser in a better fashion thanks to its seven-inch high definition screen. While the retail prices can be a little more expensive, the ProForm does have free delivery to anyone in the continental United States.

The Pro Series uses larger and heavier drive systems which allow for greater motion and challenge for things like strength training. Much like they Endurance series, the Pro also uses front drives. The Pro collection includes the Pro 9.9, Pro 12.9 and the Pro 16.9. The different models have different flywheel sizes with the 9.9 using a 28 pound wheel, and the 16.9 using a 32 pound wheel. The Pro series has 26 different levels of resistance which allows a user to adjust the system easily to suit their needs. The Pro series also includes 35 preset workout apps with iFit Coach and web browsing. With a higher sales price, this is a machine for those who want a serious workout.

The CSE Series has a brand known as the Smart Strider. Smart Striders use rear drive systems which means they take up more space than the front ones. Luckily the rear drive system can be stored vertically to help with the space issue. Thanks to the rear drives not being as heavy as their counterparts, they are relatively cheaper, even for the high end models. The CSE series is the best for beginners and feature different things to make working out easier.

Half bike, half elliptical/cross trainer, the Hybrid Series is a unique machine that allows for unique exercise routines. This machine is meant for low intensity workouts for shorter people thanks to its short stride and small drive system. The price can depend on which model you get, but the features are relatively the same. 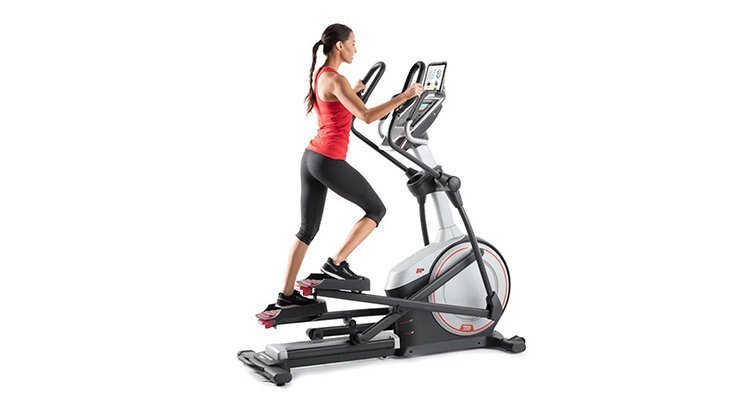 When it comes to ellipticals, the ProForm elliptical is a good choice because of all the features and different lines they offer. Each series offers different models that allow for different workouts depending on what your goals are.

The Endurance series is good for anyone who wants to build up their cardio and push themselves, but not over exert themselves. This one features a wide range of machines from those who want a casual workout, to those who want to get into shape. While not as adjustable as their counterparts, the price is variable depending on if you want to go for the low or high end model.

The Pro Series, is the best for those who want an intense workout. Thanks to their heavier stature and range of adjustment you can achieve higher results. Unlike Endurance however, the Pro Series is meant more for strength training than muscle longevity. These elliptical-trainers make more use of the iFit Coach which can help customize your daily workout and switch up your routine.

The CSE Series is the equivalent of “my first exercise machine,” which isn’t a bad thing. It’s simple in execution which allows a new owner to slowly integrate themselves into using an elliptical-trainer. The drives aren’t heavy, although they do take up a bit of room thanks to the rear drives. However, this allows them to be on the lower scale price wise which is good for beginners.

The Hybrid Series is for those who wants to have a workout, different from a standard elliptical. This is a specialized machine with a few different bells and whistles, but will still achieve great results. Since it is smaller, the price is comparable to ellipticals and won’t break the bank.

While the individual machines will vary, user reviews for ProForm are positive in general. They are a good brand to go with, especially if you are new to the elliptical market.

ProForm
Proform has 30 years of experience within the fitness industry and is therefore one of the better-known brands. If you are looking for variation, a Proform elliptical cross trainer offers a solution. Choose a front or rear driven cross trainer. The products are great for a fair price!
Reader Rating1 Vote4.7
Quality
Design
Price
4.1